MIGRANTS project intends to reinforce the institution capacity of Tunisia Higher Education System. Given its geo-political situation, Tunisia can play, in this specific context, an important role for itself and for the surrounding countries, including the EU member states. As stated by the Intergovernmental Conference to Adopt the Global Compact for Safe, Orderly and Regular Migration (Marrakech, Morocco, 10 and 11 December 2018): Migration is a multidimensional reality that cannot be addressed by one government policy sector alone. To develop and implement effective migration policies and practices, a whole-of-government approach is needed to ensure horizontal and vertical policy coherence across all sectors and levels of government.

MIGRANTS project promotes a broad multi-stakeholder partnership to address higher education in migration in Tunisia in all its dimensions including migrants, diasporas, local communities, civil society, academia, the private sector, parliamentarians, trade unions, national human rights institutions, the media and other relevant stakeholders in migration governance both in the Partner Country and in Europe. The main objective of MIGRANTS Project is to improve the quality of Tunisian higher education and enhance its relevance for the labour market and society in order to support its capacities in local, international cooperation and global partnerships for safe, orderly and regular migration, in line with national priorities, policies, action plans and strategies, through a whole-of-government and whole-of-society approach. 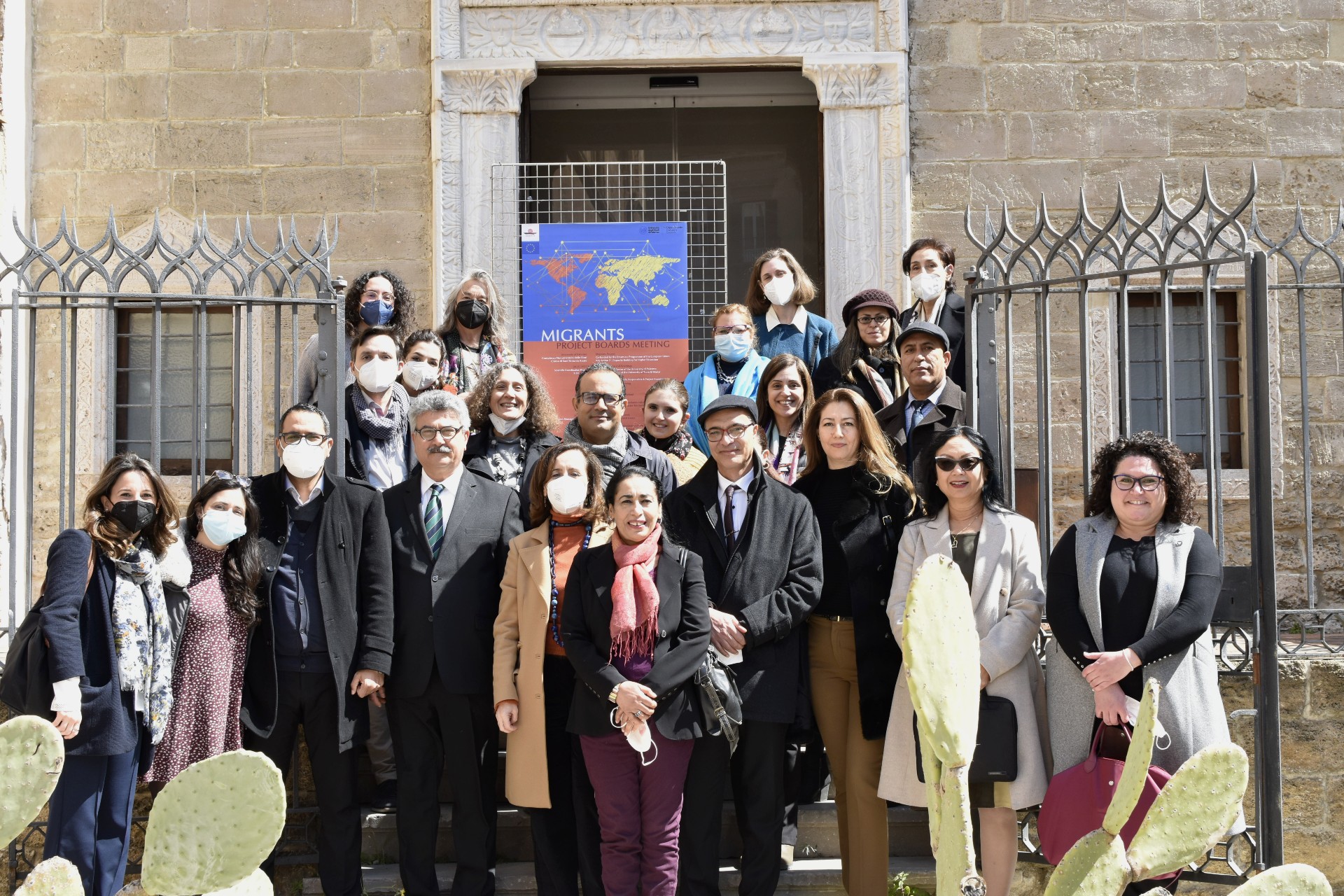 The increase in migratory flows is a global phenomenon associated with regional instabilities and insecurities, including long-term push factor and other factors related to globalization processes in the economic (the gap between the global South and the global North), political (expectations associated with human rights, and democracy practices), demographic (declining population in the North, increasing population in the South) and technological sectors (transport and communication innovations). However, local push factors are extremely important and need to be assessed in order to understand the on-going migration process and its variations.

The Central Mediterranean route originating from African countries and arriving to Italy via Libya has traditionally been one of the main sea routes towards Europe. The area from which the migration flow through the Central Mediterranean route originates is characterized by many instability factors. The presence of armed conflicts, weak or failed states, difficult political transitions, terrorist groups, extreme human rights violations, poverty and demographic pressure all play a role as push factors in the more recent migration flows towards Europe. Since the beginning 2018 more than 2,000 people have lost their lives trying to cross the Mediterranean Sea. Yet, this figure captures only a fraction of the current migration phenomenon, which stretches across all sides of the Mediterranean and across Europe.

The closure of almost all legal entry channels risks increasing irregular migration, with its collateral effect of growing smuggling and trafficking in human beings. Moreover, these unsafe entry paths increasingly involve women and children. Despite the urgency of the problem, we are very far from the development of a rational holistic approach to migration issues, while they are becoming a highly divisive and conflictual site of a confrontation between countries, regional and national Institutions and governmental bodies.

According to the New European Consensus on Development Our World, Our Dignity, Our Future: “EU and its Member States should continue to play a key role in ensuring that no-one is left behind, wherever people live and regardless of ethnicity, gender, age, disability, religion or beliefs, sexual orientation and gender identity, migration status or other factors. This approach includes addressing the multiple discriminations faced by vulnerable people and marginalised groups including refugees from conflict affected countries […] EU and its Member States should promote intercultural dialogue and cooperation and cultural diversity.”

In recent years, this need has been manifested on several levels, not only by showing the limits and inadequacy of current interventions, but by identifying, as in the case of the Global Compact, inclusive strategies respecting human rights and international law, and safeguarding global security.

It is very important to stress that although refugees and migrants are entitled to the same universal human rights and fundamental freedoms, different legal frameworks govern them. Refugees are entitled to the specific international protection defined by international refugee law, while so-called economic migrants often remain excluded from international protection. As the Global Compact emphasizes, the migration phenomenon should be considered as “a cooperative structure” that looks at the human movement in all its dimensions.

The migration phenomenon has to be addressed outside the logic of emergence, by improving cooperation on international migration. This aim can be achieved by improving migration governance in the countries that face with this phenomenon. Only in this way we can assure that migration could works as a source of “prosperity, innovation and sustainable development”.

Migration produces a connection within and across geo-political regions that link countries of origin, transit and destination. In order to cope with this reality, and to avoid the negative impacts that this phenomenon might have on all these countries, it is imperative to make an international effort to strengthen the knowledge and understanding of such a complex phenomenon. This includes improving shared policies that will reduce the risks of irregular and not-governed migration, both for people on the move and for people living in transit and destination countries. Good governance and migration policies prevent, combat and eradicate smuggling in the context of international migration.

They also avoid migration flows to be used to strengthen instabilities in the countries involved, and to make them more vulnerable from a social and political point of view. According to Global Compact’s vision of international migration, it is important to recognize that a comprehensive approach is needed to optimize the overall benefits of migration, while addressing risks and challenges for individuals and communities in all the countries involved. No country can address the challenges and opportunities of this global phenomenon on its own.

In order to find adequate and sustainable solutions, the MIGRANTS project is interested in strengthening the position of Tunisia as a crucial geopolitical area in contexts of current migrations. Tunisia suffers of lack of specialized personnel in the management of migratory flows. Despite a migration management policy that the EU often addresses through the outsourcing of controls, there are lacks of interventions based on capacity building strategy of Partner Countries in the MENA Region if not through initiatives that so far are limited to the military sector (i.e. Operation Sophia).

The MIGRANTS project aims at a capacity building action that strengthens the local capacity for managing and govern migratory flows thanks to the training of highly skilled personnel able to manage, in a holistic and multidisciplinary way, the migratory phenomena affecting the Euro-Mediterranean Region.

From a geopolitical point of view Tunisia, for its institutional, political and social actuality, is in a suitable condition for the development of processes of empowerment and institution building. For this reason, the country represents a key point at the regional level for the implementation of migration policies aimed to the security of the macro-area.

As such, the Tunisian education system could represents, for the next future, an example and a driving force for the educational systems of the macro-region. With this comprehensive approach, the MIGRANTS Project aim to improve the capacity building of Tunisian High Education Institutions in order to train personals able to plan and implement governance measures and policies for a safe, orderly and regular migration, while reducing the incidence and negative impact of unauthorised migration through international cooperation. No State can address migration on its own because of the inherently transnational nature of the phenomenon.

It requires international, regional and bilateral cooperation and dialogue and High Education Institutions in the Euro Mediterranean region are the place from where this effort should start in the form of consensual and collective ownership, joint implementation, follow-up and review.

In order to give an adequate answer to this need, and achieving the set objective, the project adopts a strategy consistent with the Erasmus+ Guidelines, which is articulated through the institutionalization and accreditation of a Joint Master Degree between the three Partner Universities, and many forms of training and qualification of professors and young researchers who will set up the teaching staff of the Master.