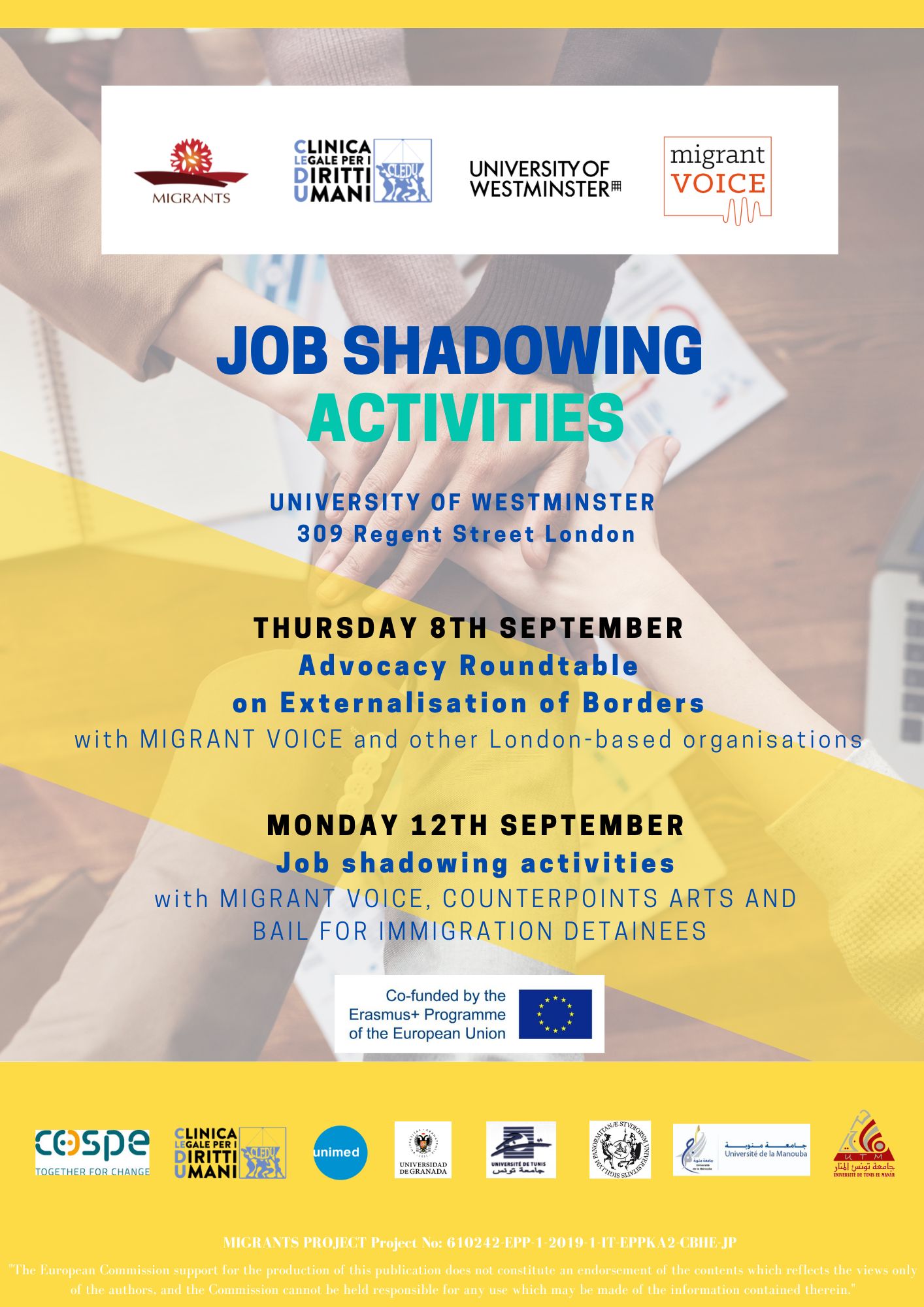 Job shadowing is an activity of on-the-job training, implemented with international agencies, organizations, institutions, NGOs, and other stakeholders whose know-how in migration issues is relevant for the participants.
The activity in London is organised by Cledu in cooperation with the University of Westminster and London-based organisations. The activity will be divided in two moments: the Advocacy Roundtable on 8 September and the Job Shadowing on 12 September with 3 organisations: Migrant Voice, Counterpoints Arts and Bail for Immigrants Detainee.

The Advocacy Roundtable will focus on issues around borders and engage UK and international perspectives in learning and discussion. Many organisations will take part to the roundtable: Amnesty International UK, Right to Remain, United against Inhumanity (UAI), International Centre for Eritrean Refugees and Asylum Seekers (ICERAS), Global Strategic Communications Network, Regularise, The Migration Observatory, Migrants Organise, Praxis.
As a global trend, borders are no longer at the edge of a state, but externalised to other countries as well as embedded inside society among ordinary citizens and through greater digitisation of border controls. Borders are now fluid, but they are around and among us. In the UK, immigration controls have been increasingly outsourced to ordinary citizens – turning them into unwilling border agents. Landlords, doctors, teachers, employers and others are required to perform checks on their patients, students, service users, and report their status to the Home Office. At the same time, the UK’s new Rwanda plan signals a shift further from externalisation of border controls to outsourcing responsibilities altogether. Meanwhile across Europe, the externalisation of borders and the increasing criminalisation of migration and those rescuing or showing solidarity to migrants demeans the notion of European values and institutions we claim to uphold.

On monday 12 September, professors and PHD students from the Universities of La Manouba, El Manar and Tunis together with Cledu and University of Westiminster and Palermo will be involved in the job shadowing activity to better know the actions of the London-based organisations and they will discuss detailed case studies on advocacy, campaigning, lobbying and communications tools to raise awareness.